You can also find me here...

It has been more than just a wee while... but things are set to change, and more work (hopefully) will be posted up here more frequently than in 4 month bursts! Here are just a few things I've been working on over the last few months... there are many more pieces that have been started and not yet finished and new wintery goodies I will hopefully get up here in the following weeks. So keep your eyes peeled!

I was asked to produce a print of the Zillah Bell gallery. I decided to have an experiment with using more than just two colours in a linocut and this is what happened. It was quite a learning curve and something I hope to experiment with more in the future. The print is available from the gallery. It is £175 and a limited edition of just 10.


Close up details of the Zillah Bell print 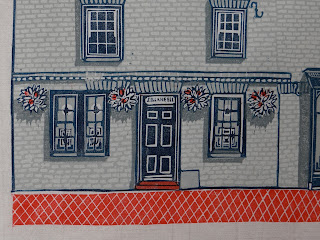 Here are two mugs I produced as a commission for a wedding present. I was told the couple like daisy's and I wanted to produce a design that wasn't too twee and flowery, but suitable for both the bride and groom. I hear they have now had their very first cup of tea as a married couple in these mugs!

I was asked by a lovely couple if I could produce a print of their home in a similar vein to my 'House 1-5' print series. Here it is!
Posted by Sophie Elm

Sophie Elm
On this tiny page you will find out all the up to date news at Jeff Josephine Designs! The latest illustrations, ceramic designs, patterns, prints, beautiful discoveries, and adventures of Jeff, Josephine and Sophie!

Thank you for taking the time to have a look at my blog. Please feel free to get in touch if you wish to ask about commissions, or any other enquiries...
sophie@jeffjosephinedesigns.co.uk
Also, all images (of my own work) are copyright of Sophie Elm. Please do not use images of my work without asking my permission. Thank you.